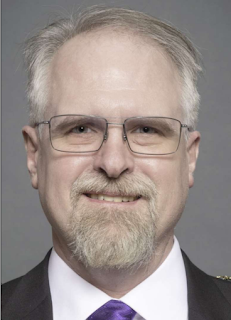 Right Worshipful Brother Richard G Howarth Jr. was appointed as the District Deputy Grand Master of the 23rd Masonic District of Massachusetts on December 27th, 2018 at the Feast of Saint John the Evangelist in a memorable ceremony at the Grand Lodge in Boston. The District Deputy Grand Master is the personal representative of Most Worshipful Grand Master Paul F. Gleason of the Most Worshipful Grand Lodge of Massachusetts. The 23rd District is composed of six Masonic Lodges from Clinton to Worcester.
Right Worshipful Brother Richard G Howarth Jr. began his Masonic journey in 2009 when he joined Franklin Lodge of Grafton. Rising through the chairs he became the Worshipful Master in 2015.  Franklin lodge membership includes his father and son. He is a 32nd Degree Mason in the Ancient Accepted Scottish Rite- Valley of Worcester and served as Sovereign Prince for Goddard Council Princes of Jerusalem. He dedicated many hours to various youth organisations: an active member of the Advisory Council for Benjamin Franklin Chapter of DeMolay in Grafton, was an Advisory for International Order of the Rainbow for Girls Framingham Assembly #47, and was Scout Master for Boy Scout Troop 107 in Grafton.
For other 20 years, the Howarth family (Richard, Michelle, and their children, Colby and Paul) have made Grafton their home. During his spare time he enjoys reenacting the American Civil War and for over 20 years has participated in historical reenactments from Georgia to Maine, holding the rank of Captain of 13 Massachusetts Volunteer Reenactors.
He earned a bachelor’s degree in Business Administration at Bryant University and is a Certified Public and Governmental Accountant. Howarth presently works as the City Accountant for the City of Framingham. He also served a President for the Massachusetts Auditors and Accountants Association.
Freemasonry is the world’s oldest and largest fraternity. It is comprised of adult men (18 and older) of good character from every country, religion, race, age, income, education and opinion. Its body of knowledge and system of ethics is based on the belief that each man has a responsibility to improve himself while being devoted to his family, his faith, his country and his fraternity. Masons use the original definition of the word worshipful: Honorable. English mayors and judges are addressed by the title of “Worshipful” even today.
For more information, please call (800) 882-1080 or visit:
MassFreemasonry.org.
23rd District Franklin Lodge

To show posts made for a particular Lodge